I clean Stockdale, which is the University Police Station, and the Lincoln building. I keep the buildings clean, do the dusting, sweeping, floor, restrooms. I keep the place picked up so that the staff can do their jobs to the best of their ability. I keep the surfaces and the environments safe and healthy. With Covid 19, there's been additional surface sanitizing, being more aware of what might be going on, making sure I'm sensitive to what staff in my building wants and making those things happen the best of my ability.

WORKED AT KENT STATE SINCE:

EMPLOYMENT PRIOR TO KENT STATE UNIVERSITY:

I worked for a janitorial contractor at Chrysler Stamping Plant in Twinsburg.

LIKES MOST ABOUT KENT STATE UNIVERSITY:

The people. Especially the University Police. They're top notch. I never want to have to go into another building other than theirs. If I can work there until I retire that'd be great. They're great people and it's a great environment.

FAVORITE MEMORY WHILE AT KENT STATE:

Oh that's easy. When I worked in Residence Services, it was the first year they invited the housekeepers to be part of the residence hall kickoff. They had a roll call, and we didn't know anything about that. And all these residence halls had their own cheers. I thought they were pretty lame and so I got another cheer in order for next year. I made a song to the tune of the theme of "Green Acres," the 1960s TV show. I had toilet swabs, I was conducting and everything. We stopped the show! And it snowballed from there -- I guess it's a big contest now, they give away a trophy. That's my lasting legacy.

ATTRACTION TO KENT STATE AS AN EMPLOYER:

The stamping plant was going to be shut down so I had to find a new employer. I was notified that there was an opening at Kent State, and they have all the educational benefits. So I applied, interviewed, and got in.

I collect East German military items. From 1949 when they were created, til 1990 when the country unified. 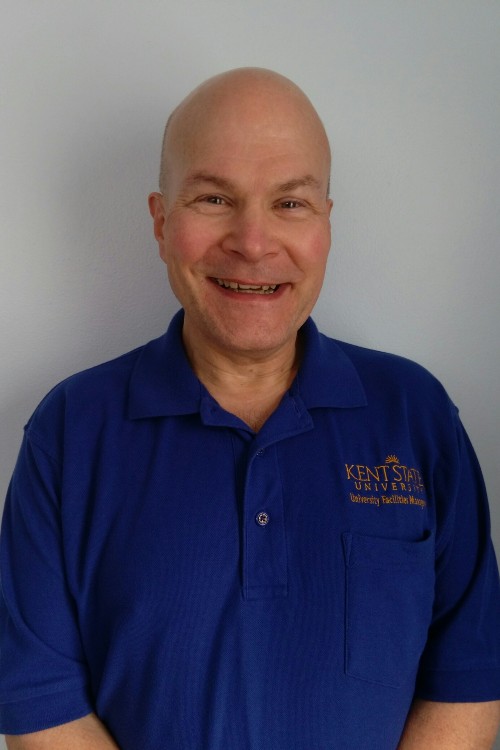