While scientists have long believed human behavior developed with the expanded cerebrum, a Kent State University researcher has shown that our path diverged while our brains were still comparable in size to those of chimpanzees.

To help her further unravel this mystery, the National Science Foundation has awarded a three-year, $310,000 grant to Dr. Mary Ann Raghanti, Professor and Chair in the anthropology department in the College of Arts and Sciences, for her project, “Human Origins and Comparative Neurochemistry.” The project continues research she published last year.

“I’ve been delving into the subcortical region, where I found the unique neurochemistry that is involved in personality style and behavior,” she said. “When Ardipithecus emerged (more than 4 million years ago), something changed her behavior, something that helped her, and her descendants become very successful. They started doing something different, and something in the brain had to change to make that happen.”

She said the shift occurred around the time we became bipedal, based on the appearance of smaller canine teeth. In other primates, larger canines mean males compete with other males for females. Because physiology and behavior co-evolve, a smaller canine means behavioral changes had already happened in Ardipithecus.

“When you think about what makes a species behave in a different way, it comes down to an ancient part of the brain,” Dr. Raghanti said. 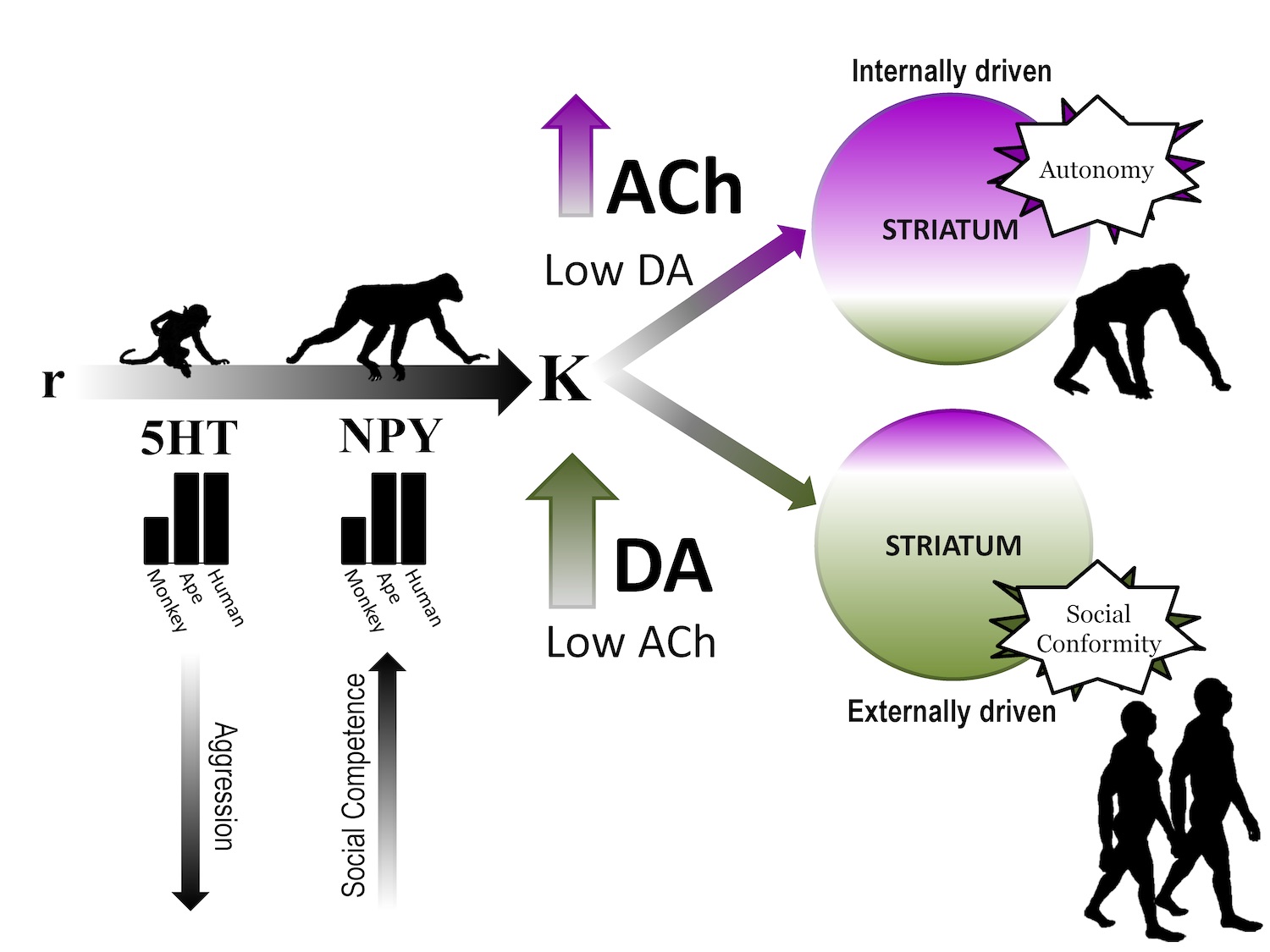 That part is the striatum, a subcortical region that regulates behaviors involved with social reward, and is involved in both personality styles and modern human language.

“If a behavior is not plugging into the reward circuit, you’re not going to do it. That’s what makes every species unique,” Dr. Raghanti said. She studies the neurochemical dopamine and others— including serotonin, acetylcholine, and neuropeptide Y — that modulate behavior.

“In humans, you have high levels of dopamine within the striatum, and that makes us more prosocial, and probably feeds into our pair bonding, altruism, and empathy,” she said. “In addition to that, we have lower acetylcholine. In other species, high acetylcholine is associated with aggression and internally-motivated behavior (read: selfish behavior).”

The shift that occurred millions of years ago led to more prosocial behavior, and social relationships become more complex, leading to even more complicated neurochemistry.

This project expands that study to include additional species and brain regions. Dr. Raghanti and her students also will analyze monogamous and non-monogamous primates by studying the striatum in tandem with other parts like the amygdala — which is directly responsible for fear and aggression.

The study also may lead to better understanding of neurodegenerative diseases like Alzheimer’s, Huntington’s, and Parkinson’s diseases and neuropathologies like autism, obsessive compulsive disorder, and attention deficit hyperactivity disorder.

“It’s interesting in its own right just to find out who we are and where we come from, but a side effect of our brain evolution is also the neurodegenerative processes that we are uniquely susceptible to” she said. “We’ve developed this organ that gives us the ability to put our own on the moon, but it also has created a target for neuropathology. By understanding how the human brain is different from those of all other species, we can begin to identify the targets for neuropathological processes that have devastating cognitive effects.”