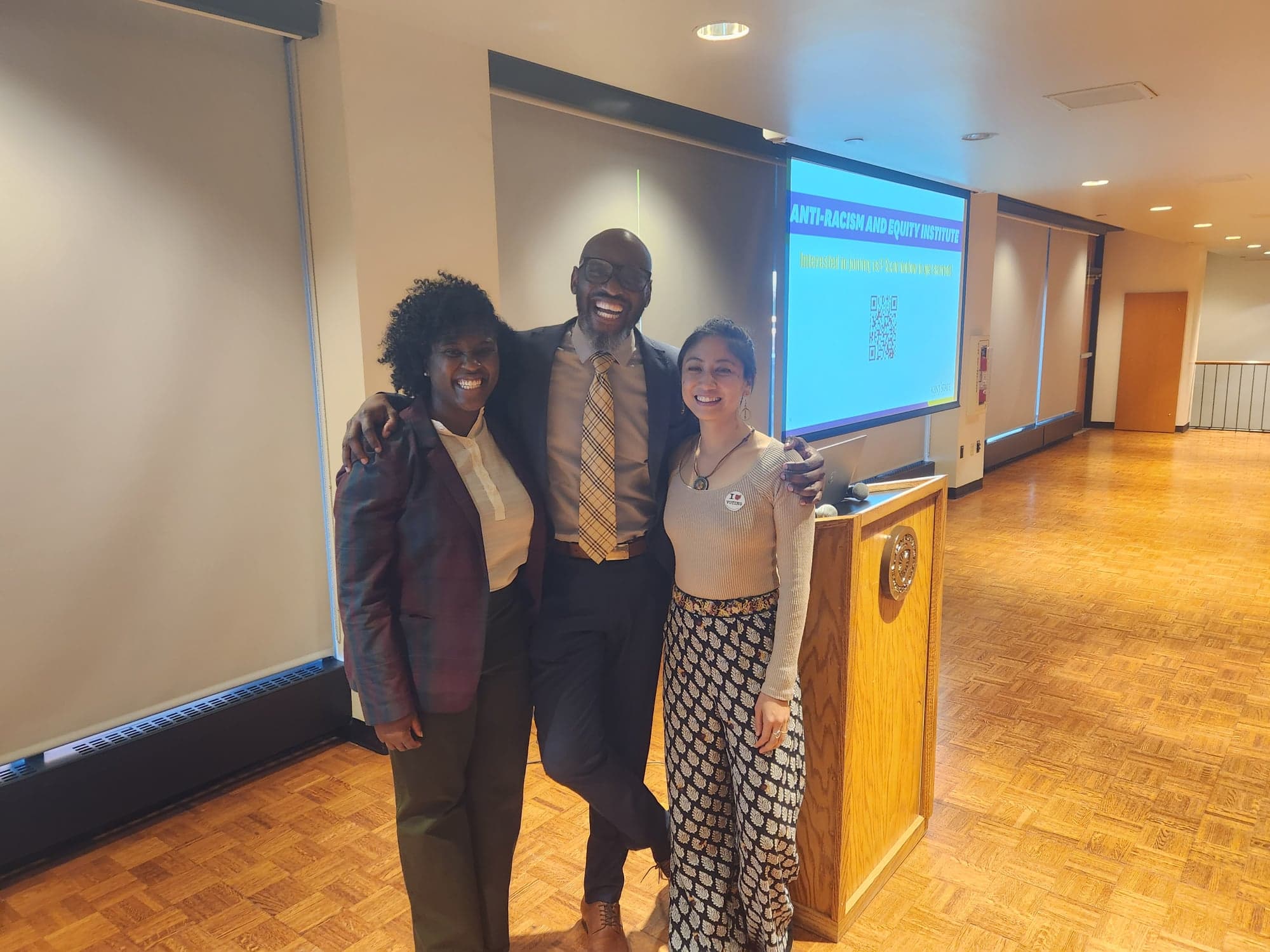 Catrina Johnson's research focuses on how gender and racial disparity affect mentorship relationships in academia, as well as the effects of criminal history on individuals’ ability to acquire meaningful work. Johnson teaches Principles of Management in Kent State’s Ambassador Crawford College of Business and Entrepreneurship. 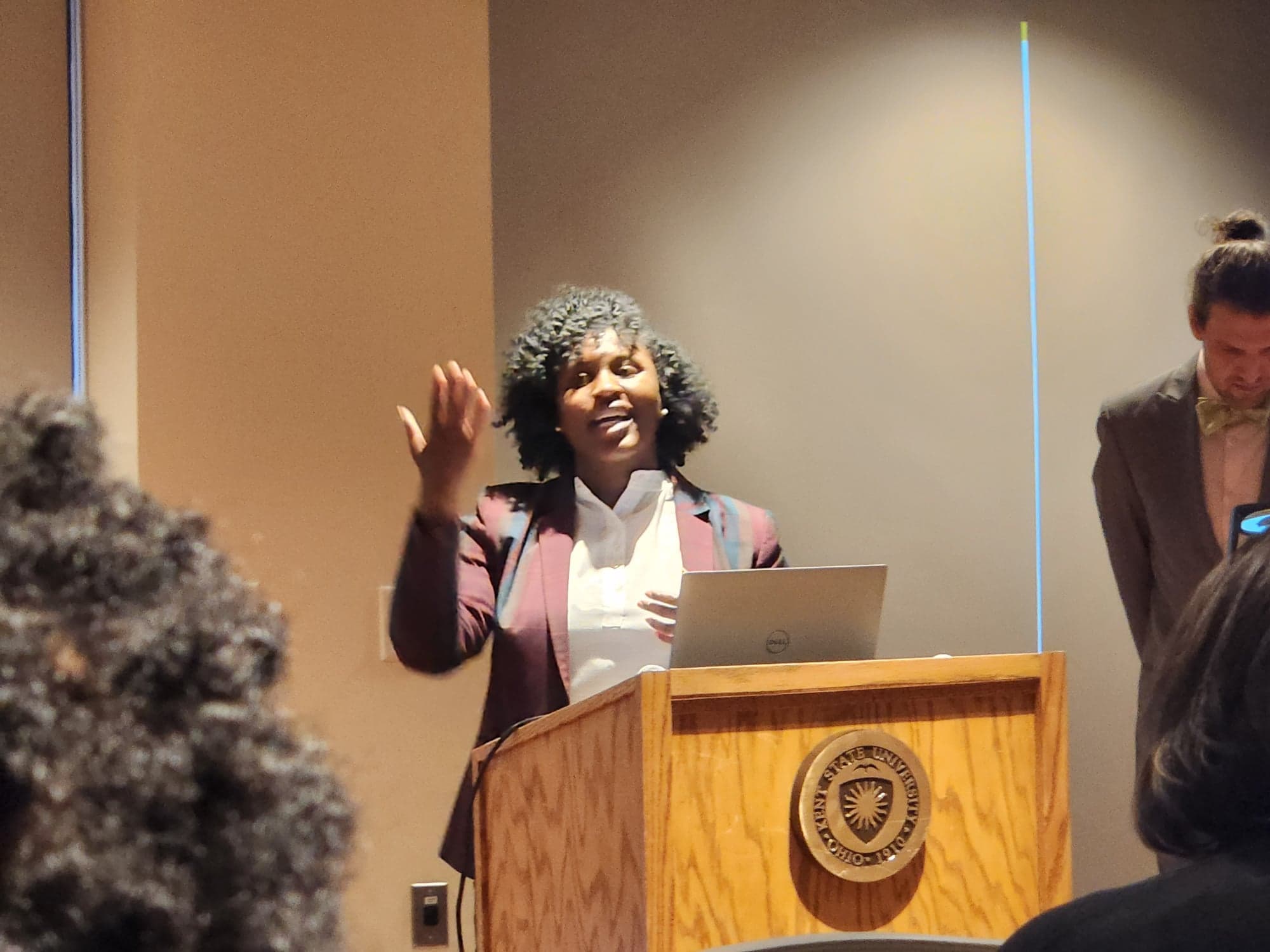 Johnson’s study examined how perceived competence because of race played a role in relationships between advisors and advisees. In the study, she observed the relationships between 121 pairs of junior faculty members and their former advisors with attention to the interaction between white or Asian advisees versus underrepresented racial minority advisees.

Johnson hypothesized that the advisor's perception of the advisee's competence was positively related to developmental opportunities as well as the growth and strength of the relationship between advisor and advisee. 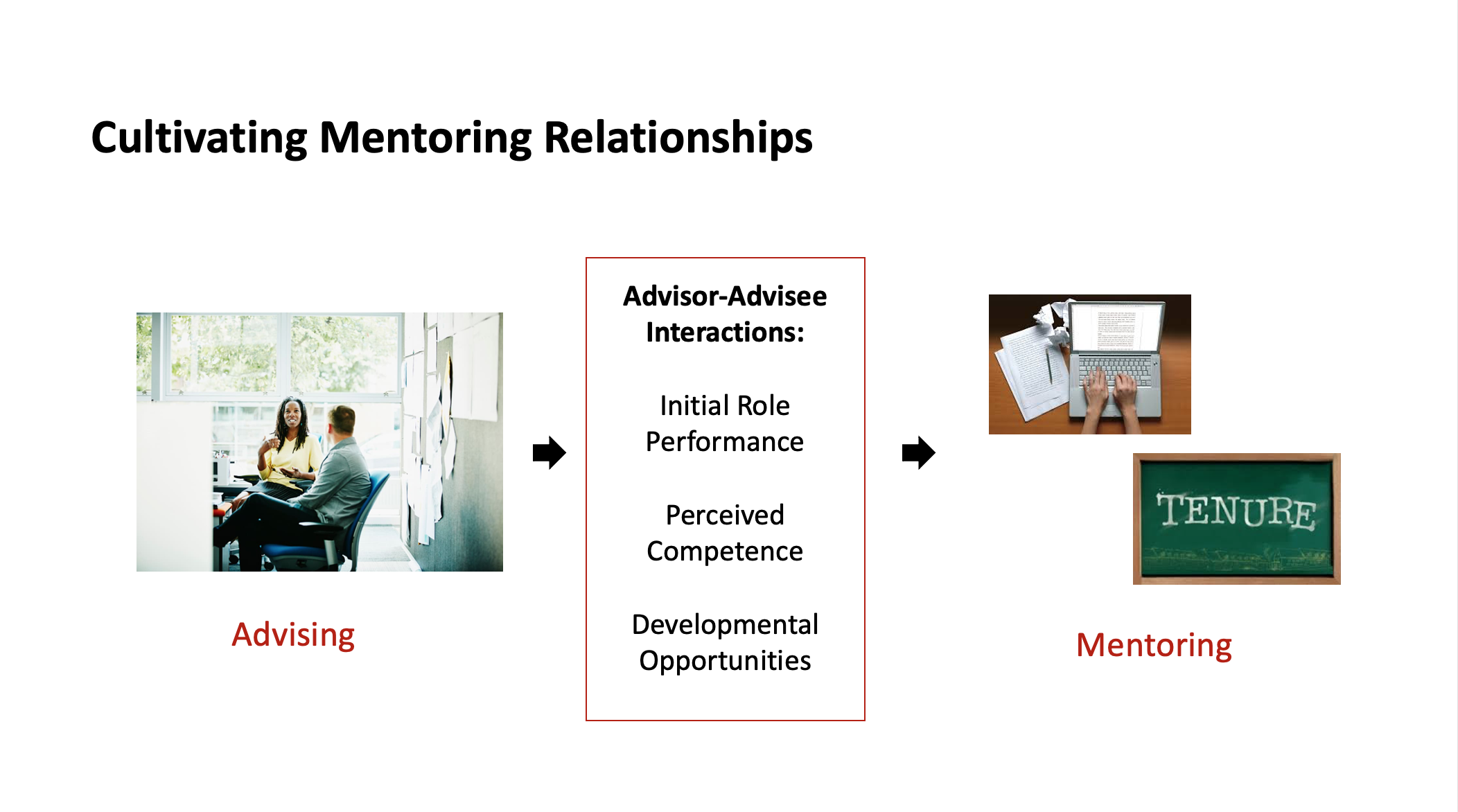 “So, when we think about the idea of meritocracy, it’s not happening,” said Johnson. “It works for white or Asian advisees but is not happening for underrepresented minorities.”

She also spoke about what she called “the leaky pipeline” in academia that illustrates the difficulties underrepresented racial minorities can face in moving from Ph.D. to tenure track professor to tenured professor.

‘Environmental Peacebuilding from Below’ 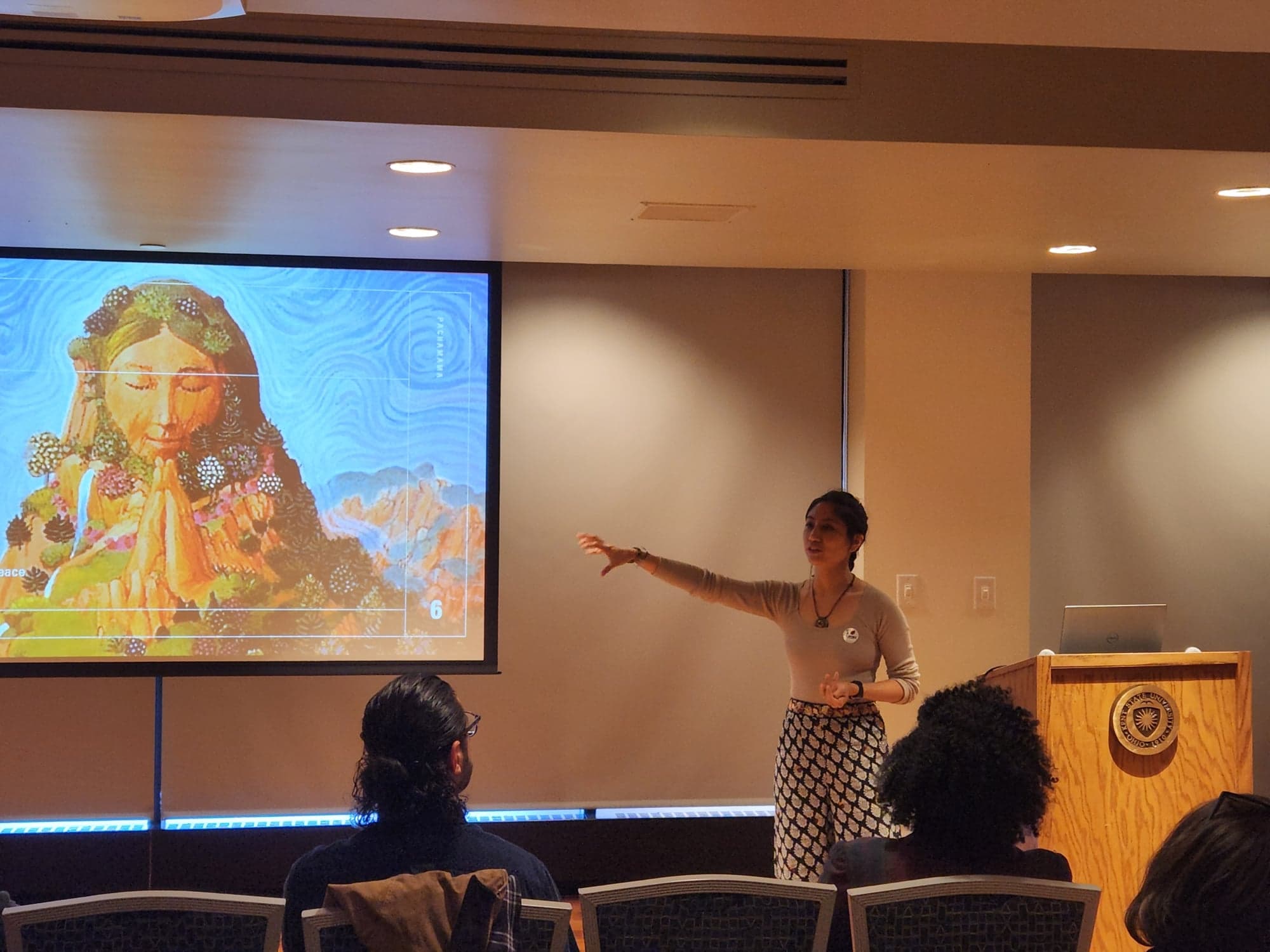 Hsiao said her work in “environmental peacebuilding from below” pulls together her different lineages of research work in a way that is key in building the kind of environmental cooperation that brings people together to build relationships and habitation, and help in overcoming conflict through many local indigenous practices or processes, conflict management, communication and more. 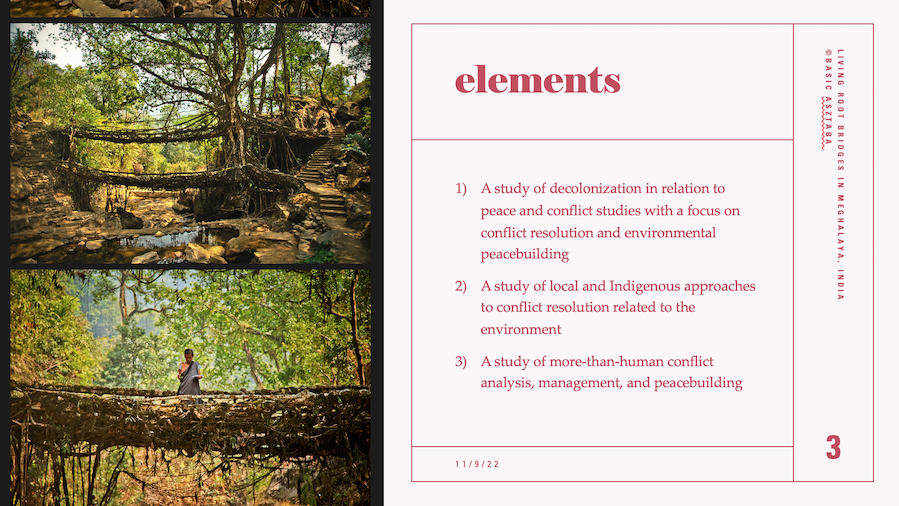 She described an indigenous peace process that occurs in a valley that straddles the border of Uganda and South Sudan. The people who live there have inter-community raids that sometimes turn violent, which prompts a peacebuilding process.

The elders gather in sacred groves, and they have, these are spaces that they cannot enter without having a purification to go through cultural protocols,” Hsiao said. “They negotiate peace between their people, between their clans and then symbolically once this is settled, they break spears, they hand over guns, the weapons are destroyed. These sacred groves are also protected because they provide all kinds of services to the communities like water or rainfall or fruits or maybe your medicines or somewhere to be free from the dust and things like that.”

Gregory King, is an assistant professor of dance at Kent State University. His research has consistently addressed the inequities experienced by marginalized communities. It is his desire to continue making dance more inclusive and reflective of contemporary society. His research agenda is grounded in embodied practices and his interest in dance as a social text, making connections to issues of race, gender and sexuality while bringing awareness to equity and inclusion. 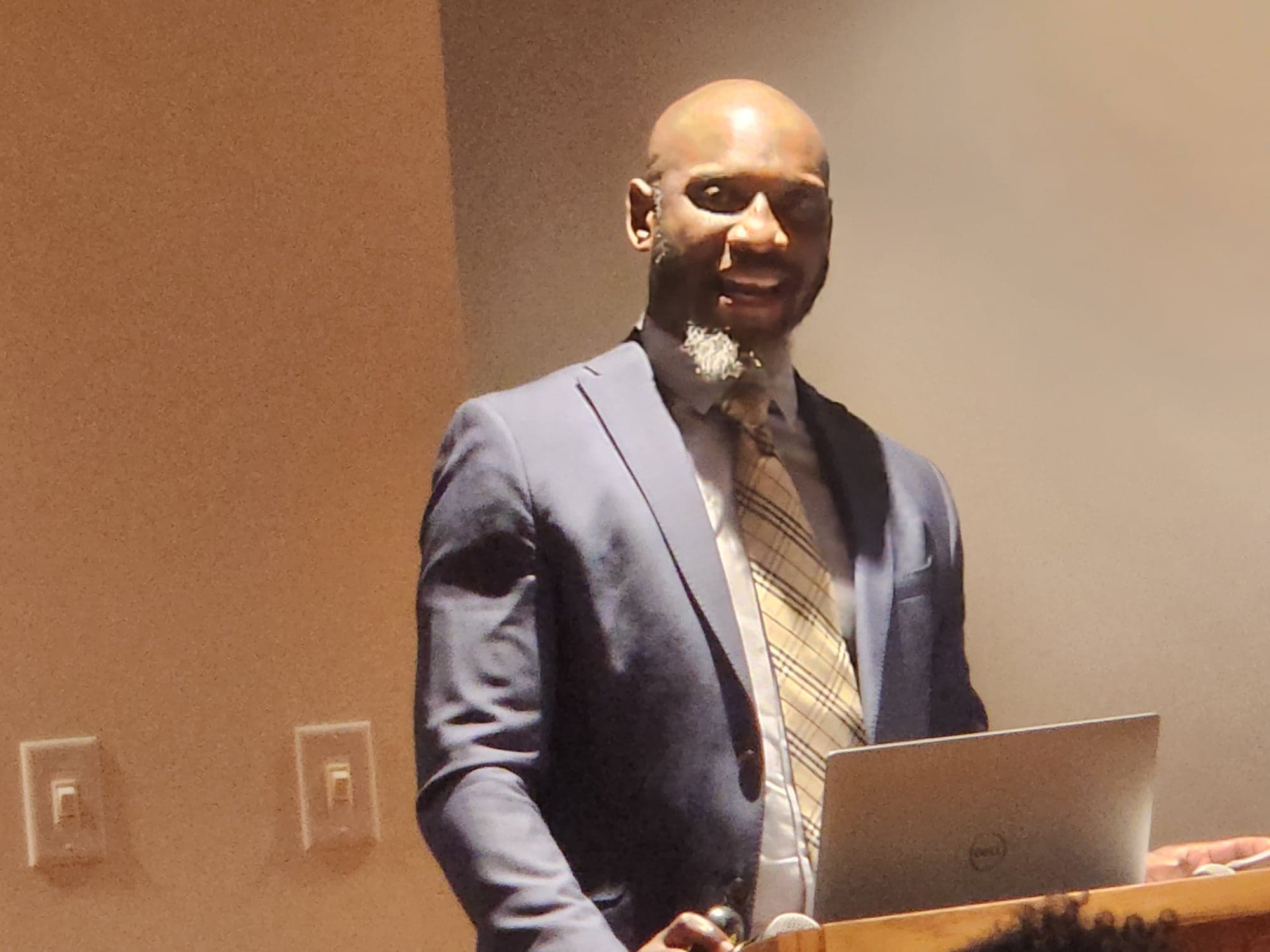 King’s presentation discussed the purpose and impact of the Decolonizing Dance Writing Project and the need for his “Sling Shot,” a generation of curricular tools which he has designed to challenge students to think beyond the status quo and to look to Black core geographies for their potential to decolonize the Black dancing body.

He named these educational resources Sling Shot, in reference to the Biblical story in which a small man, David, overcame a much larger opponent, Goliath, with a sling shot. King believes the challenge in decolonizing dance is of a similar scale. “The problem is one of colonization,” King said. “And the complexity of its reversal requires reorienting in multicultural movement traditions that dismantle its tacit, racist-evaluated lens.” 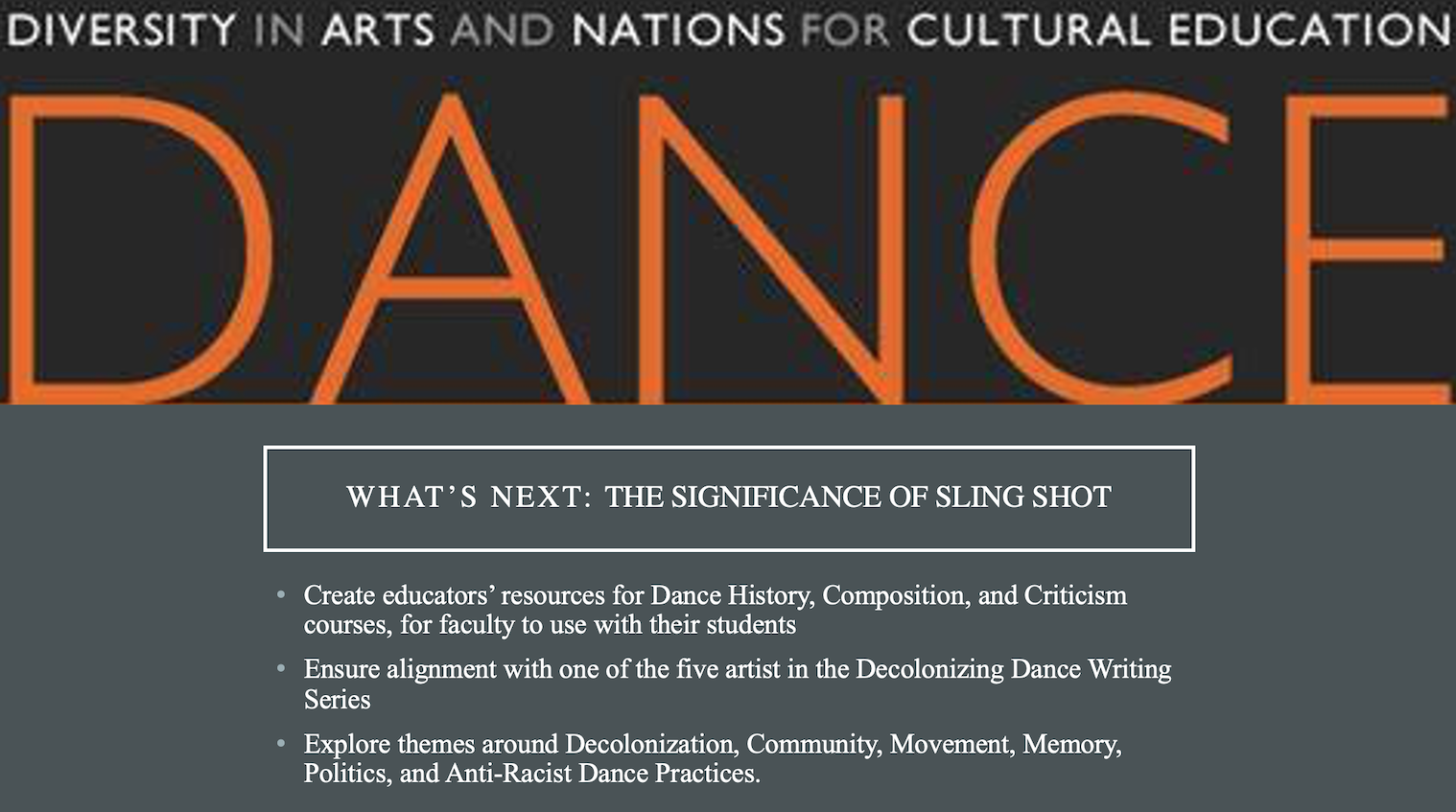 Research and Sponsored Programs seeks to energize the Kent State research community and facilitate collaborations by bringing faculty from diverse disciplines together to learn about research and creative scholarship across the university. To learn more about RASP, and its upcoming programs, visit https://www.kent.edu/research.