This annual award was created in 2017 in recognition of the accomplishments and impact of Heather E. Adams, former Executive Director of the Women and Gender Centers. This award celebrates an individual's leadership and work that have contributed to the overall wellbeing of female-identifying faculty, staff and students. 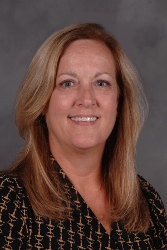 Heather Adams became director of the Women’s Center in 2008 after leaving her post as Academic Program Director in the College of the Arts. Heather started as director of the Women’s Center on a 10 month contract and was quickly promoted to the position of Executive Director of Women’s and Gender Centers. She has grown the Women’s Center from a small campus department and resource area to the vibrant educational center and support system that it has become. She has led a committed Board over the years to aid in reaching these amazing accomplishments and all the while has remained focused on creating spaces of warmth, support and care for women across all facets of the campus community.

In her short amount of time with the Women’s Center, she evolved the education and knowledge of the university community to further support intentional sexual assault response and the eventual creation of the Sexual and Relationship Violence Support Services, known as SRVSS. This growth also included upgrading the Women’s Center and SRVSS physical space by expanding into the Williamson House, a vibrant hub for empowerment, leadership development, student support and engagement.

Nominate a Woman of Impact