The PhD is offered for Human Evolutionary Biology and is administered through the School of Biomedical Sciences.
Applications are due by Jan. 1 for domestic applicants (and Dec. 15 for International applicants).

Admission to the program requires a master's degree, usually acquired at Kent State. Course requirements are specified by the Division of Biomedical Sciences and the Human Evolutionary Biology Program. Research specialty is the student's choice as are all mentoring relationships. Often mentoring is shared by two or even multiple faculty, depending on the student's chosen area of study.

ABOUT THE PH.D. PROGRAM 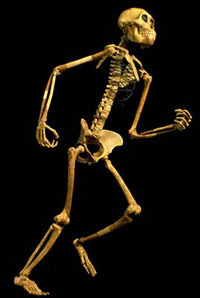 Since Charles Darwin’s 1871 publication, The Descent of Man, both scientists and the public have pursued a fascination with understanding how humans “came to be.” Evidence from both the fossil record and comparative structure (with other primates and mammals) has been systematically sought in an effort to illuminate why only one mammalian species developed cognitive abilities. Beginning with Dart’s discovery of Australopithecus in 1924, field discoveries have now extended this fossil record deep into time. The record has burgeoned over the decades (especially since 1990), and it has now become an almost complete chain of evidence stretching from our last common ancestor with the African apes to living humans today.

Despite this knowledge, the contemporary focus of human paleontologists, the public, and the media has remained almost exclusively on hominid phylogeny and reconstructing the human "family tree." Even with the recent discovery of fossils representing our potentially oldest ancestors, questions more often still focus narrowly on the issues of “who begot whom,” and how each new fossil fits into a “candelabra view” of the human past.

As a result of emergence of the vast new advances in modern biology, the Kent State faculty regard the human family tree now as merely the framework upon which the evolutionary events that led to human self-realization can be judiciously stationed and reconstructed. We believe that only such an innovative, inter-disciplinary approach can ultimately lead to a highly detailed account of our own origins. We therefore encourage each Ph.D. student to acquire a broad background and understanding of those disciplines that, when weaved together, holistically account for human evolution. These include neurobiology, primate behavior, biodemography and evolutionary theory, developmental biology, human gross structure, and genetics. We offer classes and mentoring in these areas as well as encouraging students to take advantage of classes in other departments at KSU (biology, psychology, earth sciences, chemistry, geography).