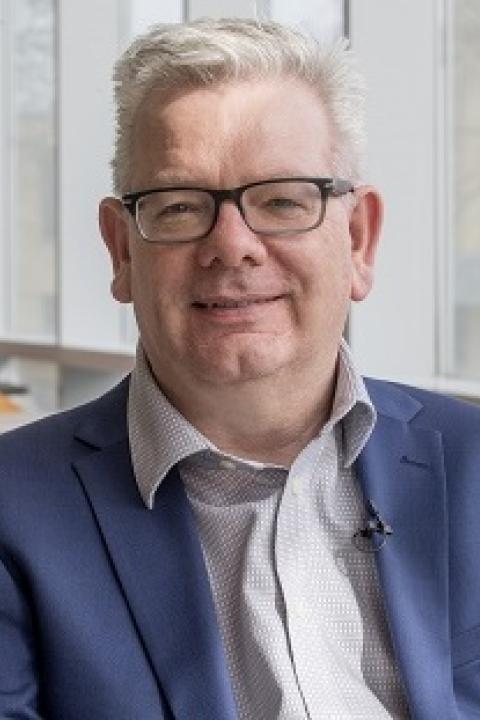 Professor Neil Cooper is Director of the School of Peace and Conflict Studies at Kent State. He has published over 50 books, edited books and journal special issues that have been widely cited. His co-authored book War Economies in a Regional Context has some 350 citations. His co-edited book Whose Peace? Critical Perspective on the Political Economy of Peacebuilding has some 230 citations. His 2006 article ‘Putting Disarmament Back in the Frame’ and his article “Peaceful Warriors and Warring Peacemakers’ have both been published in anthologies of key works. His refereed journal published in the Journal Of Global Security Studies received the University of Bradford’s best publication prize in 2018. Professor Cooper’s research has been funded by the Economic and Social Research Council of the UK, the British Academy, The Social Science and Humanities Research Council of Canada; and the Trust for Research and Education on the Arms Trade.

Professor Cooper was formerly editor of the refereed journal International Peacekeeping. He is currently an associate editor of the Economics of Peace and Security Journal and a member of the editorial board of the journal Critical Studies on Security. He is co-editor of a new refereed journal of Peace and Conflict Studies currently under development with colleagues in Peace Studies at Bradford, UK and Notre Dame in the US. He has acted as a peer reviewer for grant applications to major funding bodies including the UK’s Economic and Social Research Council (ESRC), Canada’s Social Science and Humanities Research Council (SSHRC) and the Irish Research Council. He has previously served on the Executive Committee of the British International Studies Association and was a member of the UK Economic and Social Research Council’s Expert Network established to provide advice on the social science content of the RCUK Global Uncertainties research programme. He has also served on the UK Arts and Humanities Research Council PaCCS (Partnership for Conflict, Crime and Security Research) Large Grants Panel.

His current research is focused on (i) the history of arms trade regulation (ii) cultures of military precision and (iii) the relationship between society, technology and security.

•Co-editor with Michael Pugh of Conflict, Security and Development, Special Issue on ‘War Economies, Peace and Globalisation’, Vol. 6, No. 3, Oct. 2006.

•Planned: ‘Towards a Genealogy of Military Precision’, for Review of International Studies.

• With Mandy Turner, ‘The Iron Fist of Liberal Intervention Inside the Velvet Glove of Kantian Idealism: A Response to Burke’ Critical Studies on Security, Vol 1, No. 1, 2013, pp. 35-41.

• ‘On Forgetful Goldfish and Failed Mnemonics: Transforming Political Economies of Conflict’ The Economics of Peace and Security Journal, Vol. 5, No. 1. 2010, pp. 35-44.

•Peaceful Warriors and Warring Peacemakers’ The Economics of Peace and Security Journal, Vol 1, No. 1, 2006, re-published article from ECAAR Review 2003 noted below.

•As Good As It Gets: Securing Diamonds in Sierra Leone’, in Cooper, Pugh and Turners (eds), Whose Peace? Critical Perspectives on the Political Economy of Peacebuilding, Palgrave 2008, pp. 103-117.

• Co-author with Michael Pugh and Mandy Turner, ‘Introduction’ in Critical Perspectives on the Political Economy of Peacebuilding, Palgrave, 2008, pp. 390-397.

•'The international arms trade and its impact on warlordism', in Paul B. Rich (ed) Warlords in International Relations, London: Macmillan, 1999, pp. 17-37.

• ‘No to Russia but Yes to Israel: UK arms exports are riddled with contradictions’, The Conversation, Sept, 2014

•Conflict Trade and Arms Acquisition. Report Commissioned by the Small Arms Survey, Geneva, Sept 2001 (6,000 words). The analysis and data generated was incorporated in the 2002 edition of the annual Small Arms Survey.

•How the UK Government Subsidises the Business of Death, London: Campaign Against the Arms Trade, June 1997.

Presentation on: ‘Historicizing the Discourse on Arms of Precision: From firearms in the 19th century to precisions-guided weapons in the 21st century University of Stockholm, May 16 2018.

‘Real Weapons of Mass Destruction or Arms of Precision?: A  Genealogy of Small Arms and Light Weapons in Humanitarian  Discourse’, Paper for the International Studies Association Conference, San Francisco, 2018.

Discussant at a panel on ‘Drone Warfare: Issues and Controversies’ ESRC Festival of Social Science, University of York, Nov 2017.

‘Imperial Space, Telescopic Arms Control and the Standard of Civilization’ for one-day seminar on: ‘Exploring Landscapes of Peace and Peacebuilding’, School of Geography and the Environment, University of Oxford, 22 May 2015.

‘One We (almost) Made Earlier: The US Draft Convention Governing the Manufacture and Trade in Arms at the League of Nations Disarmament Conference’. Paper for the International Studies Association Conference, New Orleans, 2015.

Presentation on: The 1950 Tripartite Agreement and Lessons for the ATT, UNIDIR seminar on the Arms Trade Treaty, Beirut, March 27-29, 2012.

The Regional Dimensions of War Economies, paper presented at an International Peace Academy Conference on: Regional Approaches to Conflict, West Point, May 5-9, 2003.

The Political Economy of Demilitarisation in Kosovo, paper presented at the UNIDIR/Graduate Institute Panel on ‘globalisation, insecurity and small arms’, at Geneva 2,000, Geneva 26-30 June, 2000.

Arming and Disarming Kosovo: A Structural Arms Control Perspective, paper presented as part of the arms control and disarmament section of the Clusters of Competence Programme established by the Swiss government, Geneva, 20-21 March, 2000.

The Economics of the British Arms Trade, paper presented to a seminar organised by Campaign Against the Arms Trade, London, Aug. 1995.