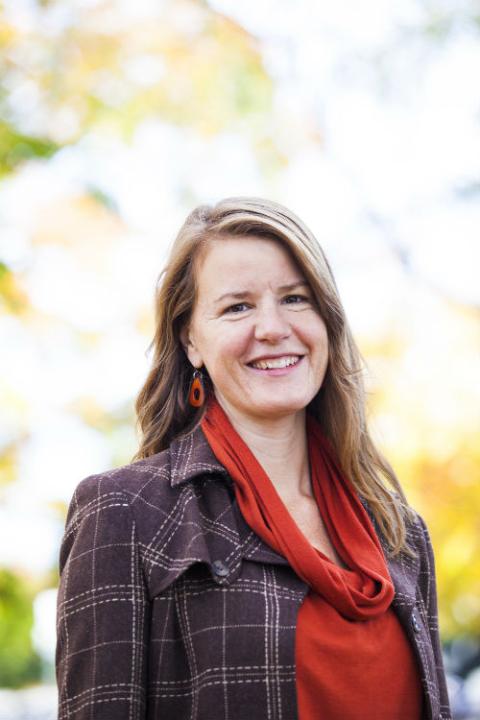 I am a feminist political geographer interested in the socio-spatial aspects of peace and peacebuilding and how interlocking systems of unequal power and privilege shape those. As such I look at solidarity efforts that work across both distance and difference to build peace and justice. I am particularly focused on global North-South international solidarity, how it can fall into colonial patterns, and how it can be decolonized.  I blog about this at decolonizingsolidarity.blogspot.com.

Much of my research is on international protective accompaniment, sometimes known by the broader term civilian peacekeeping. This is a growing strategy in conflict zones - now done in 12 countries - where international civilians who are less at risk escort local peace activists under threat. My ongoing research is with accompaniers in Colombia in particular, the country with the largest number of these organizations.

I argue that accompaniers, and the peace communities that they accompany in Colombia, are engaging in what I call altergeopolitics as they build alternative nonviolent security through solidarity. To do so accompaniers tap into hegemonic geopolitics and use systems that make their lives worth more to try to build a world where everyone’s life counts. But they run the risk of reinforcing those systems of inequality. I am interested in how they can highlight and diminish those risks, and have focused in particular on issues of race and gender.

In my current projects I am thinking through how attempts to do geopolitics differently rely on, or work to change, geoeconomic and geosocial relations – and how these are entangled with the geopolitical. I have turned to the geosocial by looking at how those doing altergeopolitics use ‘popular geopolitics’, through an analysis of the stories told by accompaniers on blogs. I am looking at how these stories do and do not challenge geographical imaginaries and their associated geosocial global racial hierarchies.

For thinking through the role that geoeconomics plays in altergeopolitics I am looking at violence associated with oil palm plantations for biodiesel in Colombia, and more broadly at how accompaniment works when violence comes from companies rather that the state. This is part of a broader funded project with colleagues who are looking at responses to hydrocarbon related violence in Cambodia and Canada (yes, all C countries).

It is an exciting time to be a Colombianist peace researcher, and I have been following closely the struggles over the peace accord, in particular the gender and differential approach in it. I have done research on the role that women’s groups are playing in the implementation of the accord, and in particular the roles that women’s grassroots mediation/community dialogue can play in implementation, as part of a broader funded project with colleagues that looks at women’s track 3 mediation in relation to peace accords, with a focus on both Colombia and Burundi. I am also thrilled to be part of a large funded research team looking at how grassroots women are building alternative securities of different sorts for themselves in 7 cities of the global South, on a project led by Linda Peake.

Prior to coming to KSU, I worked for a year as a researcher at the University of Tampere in Finland, first as part of the Space and Political Agency Research Group, and then with the Tampere Peace Research Institute. I continue to collaborate with both groups. Before that I was an Assistant Professor in Geography for two years at York University in Canada, and I continue to be connected to York through both the City Institute and the Center for Research on Latin America and the Caribbean. Before York I had a two-year Canadian Social Sciences and Humanities Research Council post-doctoral fellowship based at the Balsillie School of International Affairs in Canada, where Simon Dalby was my adviser.

My dissertation was awarded best peace studies thesis by the Peace and Justice Studies Association in 2012. In 2017 I received the prestigious Stanley Brunn Young Scholar award from the political geography specialty group of the American Association of Geographers.

Fall:
Introduction to Conflict Management
Nonviolence in Theory and Practice

Past courses:
Power, conflict, and the politics of gender (graduate seminar)