Image by Tumisu from Pixabay

Kent State University’s Mary Ann Raghanti, Ph.D., professor and chair of the Department of Anthropology, and Melissa Edler, Ph.D., are part of a team of researchers who received a five year National Institutes of Health (NIH) award to examine Alzheimer’s disease (AD) pathology in our closest living relative, the chimpanzee. 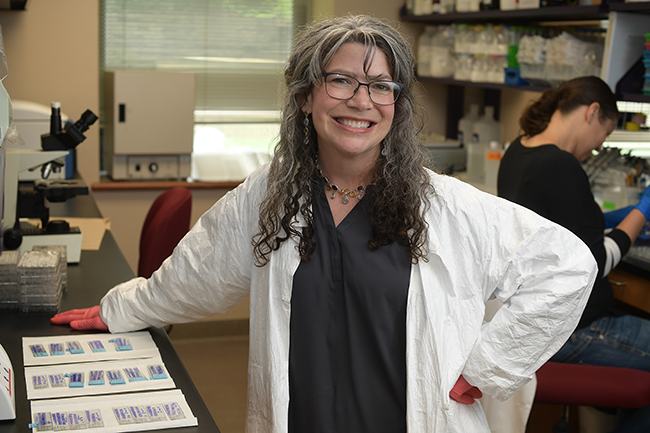 The group is conducting research related to AD, the progressive neurodegenerative disease that slowly destroys memory and brain function, and impacts more than 6.2 million Americans every year. By combining resources, the team of researchers will be able to delve deeper into understanding how to counter the cognitive loss in AD using chimpanzees. The team previously discovered that aging chimpanzees spontaneously develop the two primary pathologies of AD, amyloid plaques and neurofibrillary tangles.

The University of Texas MD Anderson Cancer Center and Emory University house living chimpanzees that are retired from research, allowing the researchers to collect behavioral and cognitive data from them.

“The tasks used to collect cognitive and behavioral data are enriching for the chimpanzees, and it’s voluntary for them. The chimpanzee gets to decide whether to participate, and they actually enjoy the tasks and the interaction,” Raghanti said. “And then as these aging animals die, we can look at the brains for the pathology and then match it up with the cognitive data we collected.”

Researchers at Kent State University, Duke University, and The George Washington University will be examining neuropathological and epigenetic changes associated with AD.

The team has already found a great deal of information related to AD pathology in chimpanzee brains and how it relates to humans with the disease. With the additional funding and resources obtained from the grant, they will be able to gain a better understanding of why humans suffer from cognitive loss compared to other animals.

“In the human brain, you see plaques and tangles, and you have massive neuron death, which is associated with cognitive loss in those with Alzheimer’s,” Raghanti said.“But in the chimpanzee brain, we have similar types of pathology, but we're not seeing that level of  neurotoxicity found in human AD. It doesn't have the same cascade effect in chimpanzees. If we can figure out what's protecting them from these downstream effects, we might be able to identify what renders the human brain so susceptible, and in doing that we can identify targets for therapeutic intervention in humans.”

Both researchers say that receiving the grant is exciting not only because the funding and resources will allow for the research to grow immensely, but also for the recognition of both their team and Kent State.

“Examining Alzheimer’s disease pathology in the chimpanzee brain was the focus of my dissertation work at Kent State,” said Edler. To see that this research contributed, in part, to this significant grant that will add a wealth of knowledge about Alzheimer's disease is really rewarding.”

“This grant will also provide an opportunity for undergraduate and graduate students to be involved in Alzheimer’s disease research too,” Raghanti said.

“It might be that they're just doing a project for independent research or independent investigation to gain skills, or they might plug into a component of a project for an honors thesis, a master's thesis or even part of their Ph.D. dissertation. These are things that we're always engaged in with students.”

Learn more about the Department of Anthropology at Kent State.