Studies suggest that the most effective way to demonstrate the value of science is putting it to work in local communities in a way that has an immediate and obvious impact.

Bridget Mulvey, Ph.D., associate professor of science education in the College of Education, Health and Human Services; and David Singer, Ph.D., associate professor in the Department of Geology in the College of Arts and Sciences, recently merged real geology research with community service in an effort to show some Akron Public Schools students that science is not just a benefit to their community but a viable career option, too.

In June, 60 sixth graders from Schumacher Elementary School and 15 high school students from across the city visited Singer’s lab on campus, where they learned about lead in soil and how to collect soil samples. Mulvey and Singer then sent them back to their communities with testing kits the students used to check the lead levels in the soil at home, at school or elsewhere in their communities.

“I think education comes full circle when it’s about learning in order to do something,” said Mulvey, whose research focus is science communication. “The kids can start to see the value of longer-term science questions that aren’t so immediately actionable. But this was something they can actually do something about, and see that science can really help them support their community and the health of the people in the community.”

After the students collected the samples, Mulvey and Singer returned to their schools to show them how to use a binary testing kit to identify whether their samples tested positive or negative for a certain level of lead contamination. The students then created Google Maps that showed where their samples were collected and what the lead levels were.

The soil samples were all returned to Singer’s lab, where his graduate students will study them further as part of a separate, purely geological project. 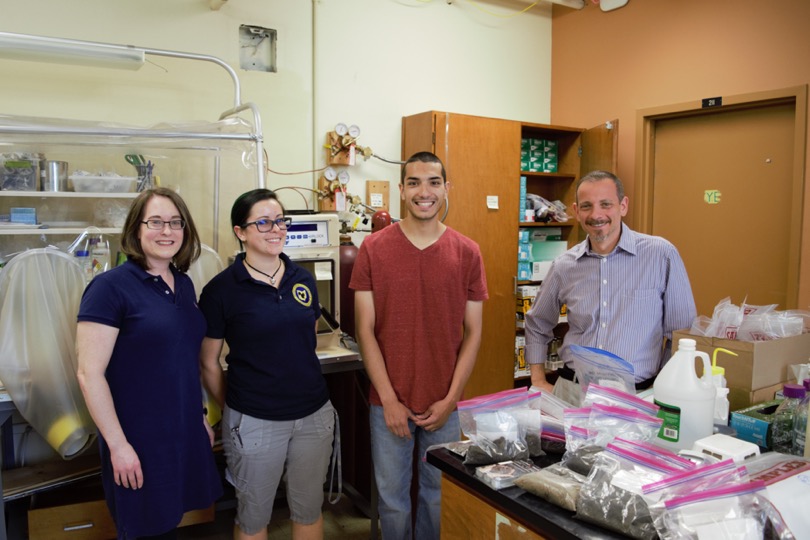 Two winning groups presented their projects at a special luncheon that welcomed family members, educators and the deputy mayor of Akron.

“One of the things we’re aiming for is not just to teach kids about science or how to do science, but to give them exposure and see that they can be a scientist,” Singer said. “So the content is important, but the experience and the awareness that goes with it is almost as important, if not more important.

“In a few years, if they don’t remember anything about what we discussed about soil but they have this understanding that being a scientist is a pathway they can choose and enjoy and be successful in, and bring that back to their community, I’m OK with that,” he said.

The project was born of a seed grant awarded in April by Kent State’s Environmental Science and Design Research Initiative (ESDRI). Singer said that while the pilot project stayed on the smaller, self-contained side, its purpose was to develop preliminary data showing it can work on a larger scale. Based on its success, Mulvey and Singer say they plan to begin developing a federal grant proposal next year to carry it further.

“This is exactly the kind of work that we are excited to facilitate and highlight through ESDRI,” said Chris Blackwood, Ph.D., professor of biological sciences in the College of Arts and Sciences and ESDRI co-director. “It is wonderful to see a new team of faculty come together to do a project with such an important impact across the board – education, health and the environment. I can’t wait to see where it goes from here.”

For more information about research at Kent State, visit www.kent.edu/research.