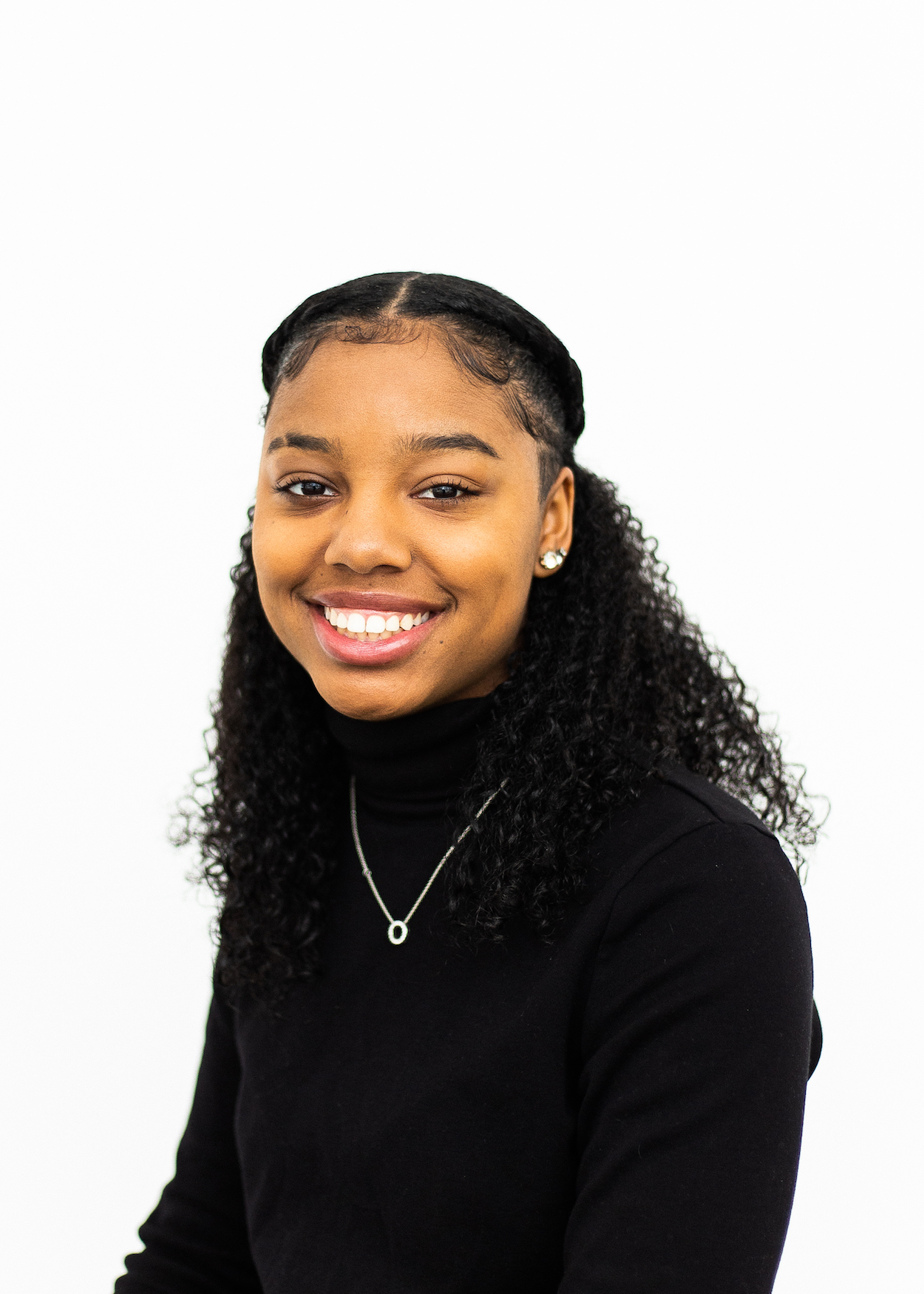 How did you become involved in the McNair Scholars Program?

Clemons: I got involved in McNair because I would always be in the Center for Undergraduate Excellence studying and I loved the atmosphere there. I’d always look at the brochures and I remember that I picked one up for McNair and it described how the program assisted students interested in graduate school.

I’m in a lab at Kent called the PRADAA lab. PRADAA stands for Program for Research on Anxiety Disorders among African Americans. I remember them telling me that McNair was a great program, and so I applied. I had a lot of people that I knew who were in it and the way they’d talk about the sense of family, amount of support and community that is there to push you to the next best thing really attracted me. When I got in, I was so happy.

What did you research as a McNair Scholar?

Clemons: Right now, I’m doing academic year research, but my original entire research was with the lab I’m currently a part of. At one point, I had a minor in film because I enjoyed photography and film. Because of this, I really wanted to find a way to combine my two passions of photography and film with clinical psychology. The lab was doing exactly that; they already had a grad student who was working on the psychological effects of negative stereotypes from images, her name is Elizabeth Jean and she was a massive help to me. I asked the person who runs the lab, Dr. Angela Neal-Barnett, to be my mentor and she agreed.

She gave me full range to pick a topic and I had said I wanted to study images with the grad student. We decided on a topic based off pre-existing data from the lab. We wanted to study if there was any relationship between what’s known as the ‘acting white’ accusation and media’s stereotypical images of black women. ‘Acting white’ is something that black students are often accused of amongst other black students; ‘acting white’ means they may talk a certain way or they talk very proper. We collected data from a middle school in Akron and assessed how many times female students had heard the phrase that they ‘act white.’ We wanted to see if there was a relationship between that accusation and the images that these black girls are always seeing.

One is the ‘angry black woman’, and this is something that we see in the tv shoe “Empire” they depict black women as constantly mad or angry; this is how Serena Williams is depicted in real life.

The second stereotypical image of black women is the ‘jezebel.’ This is something we see within mainstream media when Cardi B or Nicki Minaj is shown as a black woman who’s often promiscuous on television, always chasing men and being sexually irresponsible.

The third stereotypical image of black women is the ‘mammy.’ This image has existed throughout time of a black woman who’s single, has huge features and is the caretaker of the house. An example of this would be Madea or Big Mama. They’re typically unattractive and doing domestic work for no financial gain.

We wanted to see how often these black middle school girls are viewing these images (frequency), how often they’re identifying those images as negative or positive, and the identification of the images (which is how much the black girls see themselves in this light). The results were amazing. What we found was that the more the black middle school girls viewed the images shown to them as negative, the more they were accused of ‘acting white.’ We also wanted to look at their bother intensity to see how much this ‘acting white’ accusation is affecting them. Most of them reported that they were extremely bothered by the accusation.

Black girls are growing up and watching these stereotypical images. As a little black girl, they’re already being prescribed to what it means to be a black woman. Young girls will do their best to act completely opposite of these images since these girls think the images are negative. Since they’re acting opposite of these images, they’re not going to have a good self-identity and their self-esteems will be lower. We were able to see these psychological effects of these images and it was such an amazing thing because film and photography was already so important to me. The paper is called
“Through a Black Lens: An Exploration of Media Stereotypes and the ‘Acting White’ Accusation.”

How did you connect with your mentor?

Clemons: At first everything was in person, so I was fortunate because my mentor and I had already gotten the chance to get to know each other. However, everything turned remote and virtual with the pandemic. I had already known my faculty mentor because I’d applied to participate in her lab freshmen year and she was someone I knew, but I also knew she was very busy.

When we started discussing how we’d like to complete the research, we met virtually. I did a lot of work with one of her graduate students in the lab which was cool because she helped a lot on my paper.

Did you face any obstacles during research?

Clemons: Besides the pandemic, there weren’t many obstacles completing the research. I was very blessed to be in a lab that already had data available and was already working on research with African Americans. It wasn’t hard to conduct the research. COVID-19 presented challenges because there were activities that previous cohorts of McNair Scholars got to do like travel to grad schools. I think we didn’t get to do that which challenged me to take control of my own grad school items. Since everything was virtual, it got a bit hard for me to focus on grad school. It was a lot, and it caused me to feel stressed. I think managing things better and spreading out tasks was a challenge.

What do you feel are the benefits of researching as an undergraduate?

Clemons: I think it depends on the unique individual. If you are someone who does see grad school in your future and you’re excited about higher education, then it allows you to get research experience early on. For me, it allowed me to see the different types of jobs that involve this research. You’re doing research, but it allows you to see the impact. People are always super astonished by what you’re researching. You have a community where everyone is researching and learning new things.

What advice would you give to students who are interested in research?

Clemons: I would advise students who are interested in research to learn about yourself and learn what it is that you’re passionate about. When it comes to research, try to incorporate your passion into that; if you do that, it won’t feel like work or anything like that-- it’ll come naturally to you. Also, don’t be afraid to research the unresearched!

How do you think you've grown as a student and as a professional as a result of your research? How will the research support your future academic or professional goals?

Clemons: I think this research made the lens clearer regarding what I should be doing when it comes to my purpose in life. This experience taught me about my passions and helped me grow because I loved presenting my research at various conferences over the summer. It taught me that I should go into more stuff like this, and I concluded that I wanted to go into professing and talking about research.

For a while, I struggled with what I wanted to do; I wasn’t sure. I was thinking of being a therapist and many other things. But this research showed me so much and opened a lot of doors.

What do you enjoy doing in your spare time?

Clemons: In my spare time I love to catch up on my movies and tv-shows. I’m also constantly reading books and trying to expand my knowledge. I also really love taking photos, and I’m currently photographing grad school shoots.

How did you decide to study your major?

Clemons: I knew I always wanted to go into psychology because I was homeschooled growing up. When I was growing up, the homeschooling allowed me to explore various areas of study. I wasn’t confined to only learning about a few subjects. I was very interested in how people function, and psychology became interesting. I took my first psychology course in high school and it was taught by a psychologist—to learn about her everyday life was very interesting. I loved the idea of having questions and answering them from a scientific point of view. I’ve also always been a babysitter and I’ve really enjoyed that. When I’m with children, it’s very interesting to learn about children and then be with them in an interactive setting—this encouraged me to study child psychology and how things affect us when we’re young.

If you had to change your major, what would you change it to?

Clemons: Digital media production. I loved the class Media, Power and Culture. I was in Franklin Hall and it was so cool to see students running with the news and people were always participating in hands-on activities. I feel like people have a fun time in Franklin Hall.