Sculptures on Loan from the Ohio Arts Council

Two exterior sculpture works were installed on the Kent Campus during the summer of 2011. The sculptures were placed on permanent loan to Kent State University by the Ohio Arts Council (OAC), who had to find new homes for the artwork when their offices moved to the Rhodes Office Tower. 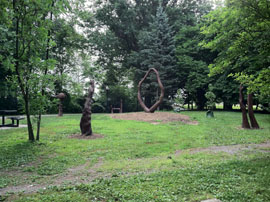 “Legend of the Iron Hoop”, comprised of five pieces, was created by Kent State University Professor Emeritus Brinsley Tyrrell. In the summer of 2011, the artwork was installed on the Kent Campus in a natural setting between Henderson Hall and the wooded area to the north. “Legend of the Iron Hoop”, 1980-1981, was first installed as part of a year-long exhibition held at Edgewater Park in Lakewood. In 1985, The artwork was reinstalled for the first Governor’s Residence Art Collection at the Ohio Governor’s Residence located in Bexley. The piece remained on view at the residence until it was relocated to the OAC office in 2003.

About this Artist: Brinsley Tyrrell was born in Godstone, Surrey, England and received his degree at the Camberwell School of Arts and Crafts, London, England, N.D.D. Retired from Kent State University’s School of Art, Tyrrell lives in Ravenna, Ohio. Tyrrell has received many commissions through the Ohio Percent for Art Program administered by the OAC. Through this program he created a significant public artwork for the Kent Campus, “Behind the Brain”, which is located by Merrill Hall. Tyrrell is an established studio and public artist. 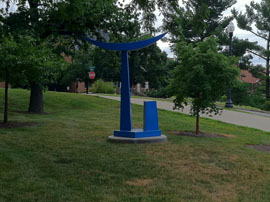 This untitled piece, by James Clover was created in the 1970s. During the summer of 2011, it was installed near the Lefton Esplanade at the east end of Bowman Hall. The piece was donated to the OAC in 2003 and repaired in 2007.

About this Artist: James Clover was born in Oskaloosa, Iowa and received his BFA from the Kansas City Art Institute and his MFA from Tulane University. He has taught at the Atlanta School of Art and was an Assistant Professor of Art at The Ohio State University. His work has been exhibited at the High Museum of Art in Atlanta, Georgia; Jackson Mississippi Airport; Galerie Simonne Sern, New Orleans; and Brandeis University, Waltham, Mass. Clover currently resides in Grand Rapids, Michigan.