An interdisciplinary team of Kent State University STEM professors has received a two-year, $300,000 National Science Foundation ADVANCE grant to explore the impact gender and other factors have on the workloads of the university’s STEM faculty.

“Who is Counted and What Counts: Tracking Women’s Engagement in Low-Prestige/High-Workload Service Activities at Kent State University” will examine whether faculty members with underrepresented and/or historically excluded intersecting gender and racial/ethnic identities (IGREs) perform more high-workload, low-prestige service work than their faculty peers.

“Some examples of high-workload, low-prestige service roles include being tapped to serve as mentors for undergraduates or service on diversity, equity and inclusion committees,” said Clarissa Thompson, Ph.D., associate professor of Psychological Sciences. “People may not be clamoring to be part of these committees, but they are a lot of work, effort and emotional labor. But the editor of a journal, an example of a high-workload, high-prestige service role, may get paid substantially for their work." 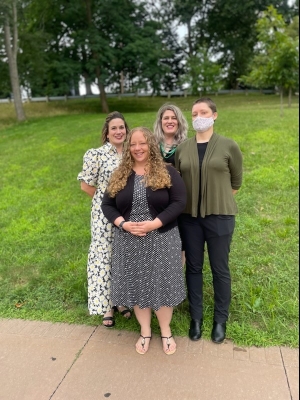 Thompson is leading the team as the principal investigator for the science foundation grant. There are three co-primary investigators: Susan Fisk, Ph.D., associate professor of Sociology; and Mary Himmelstein, Ph.D., and Lee Gilman, Ph.D., both assistant professors in Psychological Sciences.

The NSF STEM fields include the social sciences such as psychology and sociology, which are becoming dominated by women, along with ones like biology, physics, aeronautics and engineering, which have historically been dominated by men.

According to the grant overview, the team will investigate whether women faculty are “disproportionately more likely to hold service positions with lower visibility or prestige relative to male peers.”

Including IGREs in their research is a crucial focus of the project, Thompson said.

“I think one thing that is particularly important to our team is this idea of intersectional identities and thinking about how we capture the voices of folks who are falling outside of the gender binary as well,” she said.

“Women complete more high-workload/low-prestige service tasks that benefit the university, but not themselves,” the grant overview said. “Gender differences in service work are an obstacle to women’s upward mobility in academia; therefore, quantification and transparency of these disparities is imperative.”

“It's a type of service that requires a lot of work, and our preliminary analysis revealed that more women than men were doing this type of service at Kent State,” Thompson said. “Being an editor, in contrast, is high profile because it is at the top of their field. This is also considered a service role, and, in our department, they may get a course release for being an editor. So, you can see that the amount of time may be similar across these two positions. But one is benefiting self, and the other is benefiting the department or institution. And they are valued or rewarded in very different ways.”

One of the goals of the grant is to incentivize the enactment of institutional change at Kent State. The project proposes creating a repository, an online dashboard that breaks down data by NSF STEM fields and intersecting gender and racial/ethnic identities (IGREs), such as if a person were a Black woman. At the same time, the team will ensure protection of individuals’ IGREs to avoid identifying or outing them, or other adverse outcomes that could enhance rather than mitigate marginalizing them.

“It will help propel change,” Gilman said. “You would think there would have to be workshops to motivate or incentivize people to get this changed. But these NSF grants that we are building ours upon, like one completed at the University of Maryland, have demonstrated that one effective thing you can do is show people this disproportionate workload and that helps.”

The team will begin its research by focusing on the recent Kent State merit pay that was determined in the spring of 2022. The team is asking the following research questions:

A women’s support network for STEM is also in the works. The goal is for all faculty members who identify as women to come together and support one another, provide mentorship and openly discuss barriers to their research success, such as high service and teaching loads.

“This is an interesting grant because it is both research and outreach at the same time,” Thompson said. "We are hoping that it brings folks together across the campus for both support and friendship, but maybe also for exciting research opportunities.”

Gilman added that the support group would help with retention of historically marginalized or excluded identities, to help them recognize that they have a community at Kent State and that people care about their success and want them to stay at the university.

“It is not a shoo-in, but there are other levels of the grant that we may be able to apply for in future years that would allow us to expand to attempt additional institutional transformation,” Thompson said. “So, it is our hope that we are good stewards of this preliminary grant.”