When she receives her doctorate degree in cellular biology on May 14, Amber Rose Titus will enter an exclusive group: She will become one of just seven Kent State University graduates to earn her doctorate at the age of 25 or younger.

“That’s really exciting,” Titus said, as she considered her spot among the youngest ever doctorate recipients. She said the title “Dr. Titus” still seemed a bit unreal.

Wayne Schneider, Kent State’s director of Institutional Research, said that since the university began tracking such data more than 20 years ago, Titus will be just the seventh student to earn a doctorate degree so young.

“There has been one 23-year-old, one 24-year-old and previously four 25-year-olds who have earned a doctorate,” he said.

Schneider said the average age for most doctoral degree recipients is 35.

Titus, who turned 25 in February, got off to an accelerated start. After graduating from Ravenna High School in 2014, she earned her bachelor’s degree in cellular/molecular biology from Kent State in just three years, graduating from Honors College in 2017. 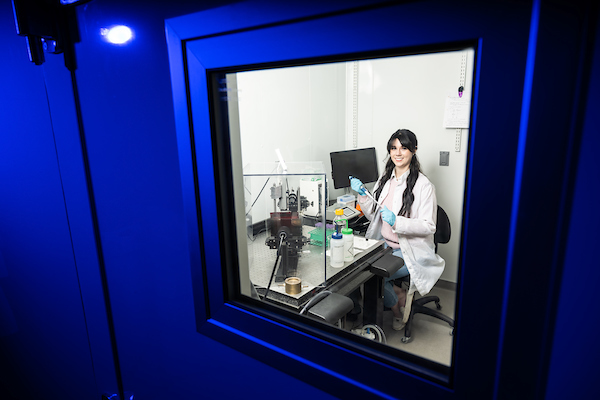 Titus then went directly into the doctorate program in cellular biology, completing her work in five years.

Titus said she “fell in love with bench research,” in 2015, when as an undergraduate, she joined the obesity research laboratory of Biological Sciences Professor Colleen Novak, Ph.D., working with animal models to study obesity and lean phenotypes.

After earning her bachelor’s degree Titus knew she wanted to continue her education and laboratory research.

She began her doctorate work in 2017 with Biological Sciences Professor Edgar Kooijman, Ph.D., whose lab conducts research into lipid proteins, branching into the fields of chemistry and biochemistry.

Through her work with Kooijman, Titus began collaborating in 2018 with Physics Professor Elizabeth Mann, Ph.D., one of Kooijman’s frequent collaborators, on a project that Mann’s lab conducted under contract for NASA to measure the fluid properties of rocket fuel.

“My background from undergraduate is all hardcore biology. In graduate school, I found that I loved physics and chemistry too, and I worked at the small intersection of all three,” Titus said.

She said Novak, Kooijman and Mann all have been excellent mentors, guiding her interests and encouraging her to explore various areas of science.

“Kent State University definitely set me up for success by providing me the opportunity to get the mentors that I have had,” she said.

Mann, who is currently on leave from teaching while she serves as a program director for the National Science Foundation in Washington, D.C., praised Titus for her willingness to delve into new areas in her education and research.

“She knew what she wanted, but she was willing to explore and find the best fit, which ended up being between biology, physics and chemistry. It took some exploring and a lot of courage to do that,” Mann said.

Titus possesses the critical thinking skills that make for a wonderful research scientist, she said.

“And she knows how to troubleshoot to see what is going wrong,” Mann said. “If you’re doing something cutting edge, she’s been really good at pushing that edge.”

Because of her skills, Mann said she never considered the fact that Titus was as young as she was, starting her doctorate program at age 20.

Growing up in Ravenna, just a few miles from the Kent Campus, Titus said she understands that many students would want to go farther away from home to attend college, but she had always dreamed of attending Kent State.

“I am one of Kent State’s largest fans,” Titus said, noting how she lived on campus as an undergraduate, served as a resident assistant for two years and was active in multiple student organizations. She is also a member of the Graduate Student Senate.

Now residing in Cleveland Heights, Titus will become a full-time employee of Cleveland Diagnostics Inc., where she has been employed part time for the past year, working on early cancer detection techniques the company is developing.

“Right now, I really love working for this biotech company,” she said. “Eventually, with more experience, I’d like to be at a higher level – a director level – where I can be overseeing a lot of different projects.”

She’s not sure what her ultimate career goal is at this point but will continue to follow the research and see where it leads her.

“I still don’t know what I really want to do when I grow up, but the opportunities I have gotten at Kent State, I know I wouldn’t have gotten anywhere else,” Titus said.