The Kent Trumbull Theatre produces many shows and performances that generate rave reviews from local critics as well as the general public. The shows are usually performed by theatre students, but sometimes include outside talent as the theatre presents three productions annually throughout the university season (September-May) and three more as part of the Summer Stock program (May-August), which includes an active youth theatre component. Students can complete their Bachelor of Arts degree in Theatre Studies at Kent State Trumbull.

Die Mommie Die! by Charles Busch (March 3-5, 10-12)
Order Tickets
This hilarious comic melodrama evokes the 1960s "Grande Dame Guignol" movie thrillers that featured such aging cinematic icons as Bette Davis, Joan Crawford, Lana Turner and Susan Hayward.  Ex-pop singer Angela Andrews is trapped in a hateful marriage with film producer Sol Sussman. Desperate to find happiness with her younger lover, an out-of-work TV actor named Tony Parker, Angela murders her husband with the aid of a poisoned suppository. In a plot that reflects Greek tragedy as well as Hollywood kitsch, Angela’s Elektra-like daughter Edith convinces Angela’s emotionally disturbed son Lance that they must avenge their father’s death by killing their mother. Lance, demanding proof of Angela’s crime, slips some LSD into her after-dinner coffee. Angela is plunged into a wild acid trip that reveals that she killed not only the children’s father but also their mother; she isn’t their mother at all, but rather their Aunt Barbara. A surprising twist ending has all of the Sussman family’s dirty laundry aired out once and for all. Angela (aka Aunt Barbara), realizing that happiness cannot be built upon a foundation of lies, turns herself in to the police.

Young Playwrights Festival by Various (April 21-23, 28-30)
We will be staging the results of our playwriting competition for High School Juniors and Seniors from Trumbull and neighboring counties.  Come see fresh new works by exciting young voices from right here in Northeast Ohio. The Kent Trumbull Theatre Young Playwrights Festival was started to encourage young writers in the Mahoning Valley and neighboring areas by producing their original plays.  Eligible students are high school juniors and seniors from Trumbull and surrounding counties.  As our team brings their stories to life, students may also be eligible for scholarships to study at Kent State University at Trumbull.

We will also be doing our popular Sips & Scripts program in collaboration with Modern Methods Brewing Company.  See below. 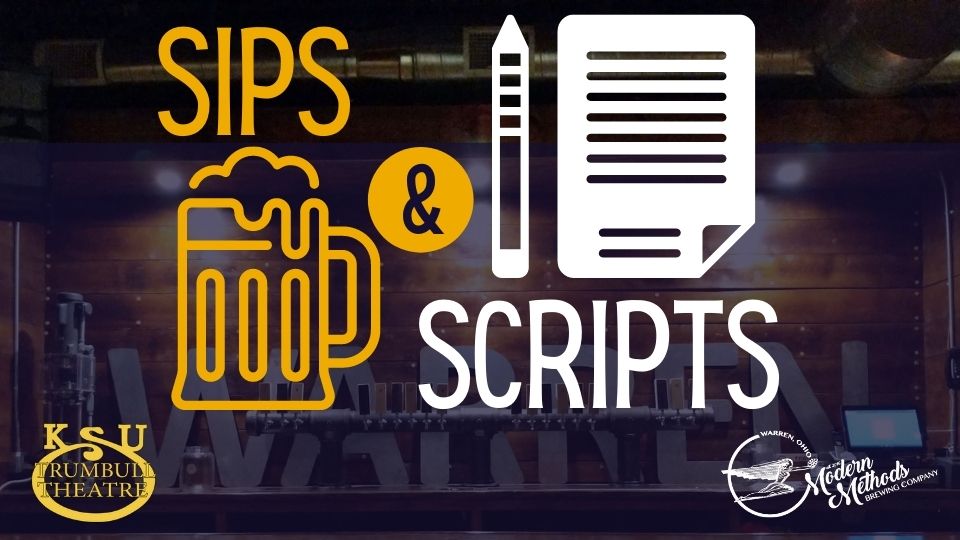 Come enjoy a new play & a pint in a relaxed atmosphere! "Sips & Scripts” supports, promotes, and produces work written by local playwrights through monthly public readings. All readings are open to the public and hosted by Modern Methods Brewing Company. Performances begin at 7 pm.